Not to be confused with Hollywood Undead member Charlie Scene.Carlos Irwin Estévez (born September 3, 1965), best known by his stage name Charlie Sheen, is an American actor. He has appeared in films such as Platoon (1986), The Wraith (1986), Wall Street (1987), Major League (1989), Hot Shots! (1991), Hot Shots! Part Deux (1993), Scary Movie 3 (2003), and Scary Movie 4 (2006). On television, Sheen is known for his roles on Spin City, Two and a Half Men, and Anger Management. In 2010, Sheen was the highest paid actor on television and earned US$1.8 million per episode of Two and a Half Men.Sheen's personal life has also made headlines, including reports about alcohol and drug abuse and marital problems, as well as allegations of domestic violence. He was fired from Two and a Half Men by CBS and Warner Bros. in March 2011. Sheen subsequently went on a nationwide tour. 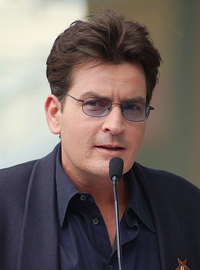 image credit
Charlie Sheen by https://www.flickr.com/photos/sharongraphics/, is licensed under cc-by-sa-3.0, resized from the original.