Catherine Leigh "Cat" Osterman (born April 16, 1983), is an American, former collegiate 4-time All-American, left-handed softball pitcher originally from Houston, Texas. She completed her college eligibility in 2006 at the University of Texas at Austin, where she was a starting pitcher for the Longhorns since 2002. Osterman pitched on the USA Women's Softball Team which won the gold medal at the 2004 Summer Olympics and the silver medal in the 2008 Summer Olympics. Osterman held the NCAA Division I career strikeout record and is still the NCAA all-time leader for strikeouts per 7-innings, 14.34. She owns numerous career records for the Longhorns and within the NCAA Division I, where she is also one of five pitchers to strikeout 1,000 batters with 100 win, an ERA of under 1.00, and averaging double digit strikeouts. 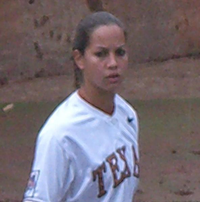 image credit
Cat Osterman by palmsrick, is licensed under cc-by-2.0, resized from the original.