Carter Anthony Beauford (born November 2, 1957, in Charlottesville, Virginia) is an American drummer, percussionist, and founding member of Dave Matthews Band. He is known for his ability to adapt to a variety of genres, and both his ambidextrous and his open hand drumming styles. He plays the drums and sings backing vocals in the band. Beauford was ranked #41 by a Rolling Stone magazine reader's poll in 2010 for greatest drummers of all time. 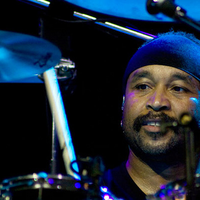 image credit
Carter Beauford by Rodrigo Simas, is licensed under cc-by-sa-2.0, resized from the original.