Caroline Elizabeth Polachek (born June 20, 1985) is an American musician, singer-songwriter, and record producer. Raised in Connecticut, Polachek co-founded the indie pop band Chairlift while studying at the University of Colorado. The duo emerged from the late-2000s Brooklyn music scene with the sleeper hit "Bruises". During her time in the band, she worked on the solo projects Ramona Lisa and CEP, before embarking on a career under her own name after Chairlift's disbandment in 2017. Her debut studio album, Pang (2019), featured collaborations with producer Danny L Harle and was released to critical acclaim. Polachek has worked extensively with other artists, collaborating with Blood Orange, Fischerspooner, SBTRKT and Charli XCX, and penning material for Beyoncé ("No Angel"), Travis Scott, and Superfruit. 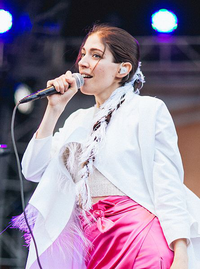 image credit
Caroline Polachek by https://www.flickr.com/people/94031922@N06, is licensed under cc-by-2.0, resized from the original.