Carl Michael Yastrzemski (/jəˈstrɛmski/; nicknamed "Yaz"; born August 22, 1939) is an American former Major League Baseball player. He was elected to the Baseball Hall of Fame in 1989. Yastrzemski played his entire 23-year baseball career with the Boston Red Sox (1961–1983). He was primarily a left fielder, but also played 33 games as a third baseman and mostly was a first baseman and designated hitter later in his career. Yastrzemski is an 18-time All-Star, the possessor of seven Gold Gloves, a member of the 3,000 hit club, and the first American League player in that club to also accumulate over 400 home runs. He is second on the all-time list for games played, and third for total at-bats. He is the Red Sox' all-time leader in career RBIs, runs, hits, singles, doubles, total bases, and games played, and is third on the team's list for home runs behind Ted Williams and David Ortiz. In 1967 Yastrzemski achieved a peak in his career, leading the Red Sox to the American League pennant for the first time in over two decades and being voted the 1967 American League MVP. Yaztrzemski also won the Triple Crown that year, a milestone which was not accomplished again in the Major Leagues until Miguel Cabrera achieved the feat 45 years later in 2012. 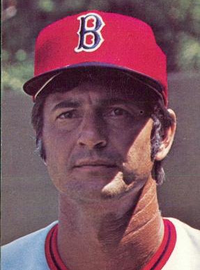