Frederick Carlton Lewis (born July 1, 1961) is an American former track and field athlete who won nine Olympic gold medals, one Olympic silver medal, and 10 World Championships medals, including eight gold. His career spanned from 1979 to 1996, when he last won an Olympic event. He is one of only three Olympic athletes who won a gold medal in the same individual event in four consecutive Olympic Games. Lewis was a dominant sprinter and long jumper who topped the world rankings in the 100 m, 200 m and long jump events frequently from 1981 to the early 1990s. He set world records in the 100 m, 4 × 100 m and 4 × 200 m relays, while his world record in the indoor long jump has stood since 1984. His 65 consecutive victories in the long jump achieved over a span of 10 years is one of the sport's longest undefeated streaks. Over the course of his athletics career, Lewis broke 10 seconds for the 100 meters fifteen times and 20 seconds for the 200 meters ten times. Lewis also long jumped over 28 feet seventy-one times. His accomplishments have led to numerous accolades, including being voted "World Athlete of the Century" by the International Association of Athletics Federations and "Sportsman of the Century" by the International Olympic Committee, "Olympian of the Century" by Sports Illustrated and "Athlete of the Year" by Track & Field News in 1982, 1983, and 1984. 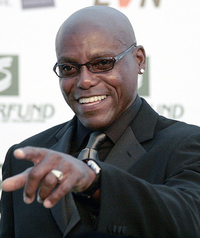 image credit
Carl Lewis by Tsui, is licensed under cc-by-sa-3.0, resized from the original.