Carice Anouk van Houten (Dutch pronunciation: [kaˑˈris ɑˈnuk vɑn ˈɦʌu̯tə(n)]; born 5 September 1976) is a Dutch actress and singer. She is best known for her role in Black Book (2006), the most commercially successful Dutch film to date. Internationally, she is also known for English-speaking works such as Valkyrie (2008), Repo Men (2010), Black Death (2010), and the TV series Game of Thrones in which she has played the role of Melisandre since 2012.A very popular actress in the Netherlands, she has won five Golden Calf Awards for Best Actress for her roles in Suzy Q (1999), Undercover Kitty (2001), Black Book, The Happy Housewife (2010) and Black Butterflies (2011). In the US she received two Saturn Award nominations.As a singer, Van Houten released a pop-rock album entitled See You on the Ice in 2012. She is the older sister of fellow actress Jelka van Houten. 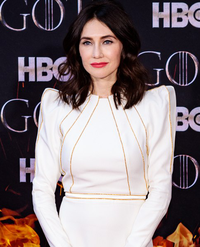 image credit
Carice van Houten by Sachyn, is licensed under cc-by-sa-3.0, resized from the original.