Sir Cameron Anthony Mackintosh (born 17 October 1946) is a British theatrical producer notable for his association with many commercially successful musicals. At the height of his success in 1990, he was described as being "the most successful, influential and powerful theatrical producer in the world" by the New York Times. He is the producer of shows such as Les Misérables, The Phantom of the Opera, Mary Poppins, Oliver!, Miss Saigon and Cats.Mackintosh was knighted by Queen Elizabeth II in 1996 for services to musical theatre. In the Sunday Times Rich List of 2011, Mackintosh was estimated to have a fortune of £675 million ($1.1 billion), making him the third richest person in the British music industry. 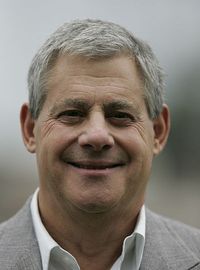 image credit
Cameron Mackintosh by Eva Rinaldi, is licensed under cc-by-sa-2.0, resized from the original.