Cameron Bruce Crowe (born July 13, 1957) is an American film director, producer and screenwriter. Before moving into the film industry, Crowe was a contributing editor at Rolling Stone magazine, for which he still frequently writes.Crowe has made his mark with character-driven, personal films that have been generally hailed as refreshingly original and devoid of cynicism. Also in late 1999, Crowe released his second book, Conversations with Billy Wilder, a question and answer session with the legendary director. 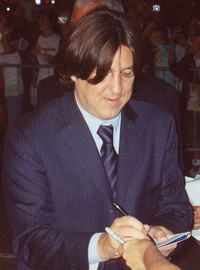 image credit
Cameron Crowe by Tony Shek, is licensed under cc-by-2.0, resized from the original.