Cameron Boyce (born May 28, 1999) is an American actor, dancer and voice actor best known for his roles in the feature films Mirrors, Eagle Eye, Grown Ups, and Grown Ups 2, as well as for his co-starring role as Luke Ross on the Disney Channel comedy series, Jessie. Cameron is also the voice of Jake on the Disney Junior show Jake and the Neverland Pirates. 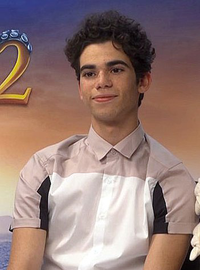 image credit
Cameron Boyce by MTV International, is licensed under cc-by-3.0, resized from the original.