Burton Leon "Burt" Reynolds, Jr. (born February 11, 1936) is an American actor, director and voice artist. Some of his notable roles include Bo 'Bandit' Darville in Smokey and the Bandit, Lewis Medlock in Deliverance, Bobby "Gator" McCluskey in White Lightning and its sequel Gator, Charlie B. Barkin in All Dogs Go to Heaven, Paul Crewe in The Longest Yard and 1970s adult-film director Jack Horner in Boogie Nights. He also played Coach Nate Scarborough in the 2005 version of The Longest Yard alongside Adam Sandler who portrayed Paul "Wrecking" Crewe. 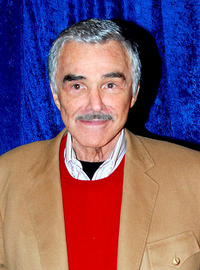 image credit
Burt Reynolds by Photobra, is licensed under cc-by-sa-3.0, resized from the original.