Sir Bruce Joseph Forsyth-Johnson CBE (born 22 February 1928) is an English television presenter and entertainer whose career spans more than 75 years. In 2012, Guinness World Records recognised Forsyth as having the longest television career for a male entertainer.Forsyth came to national attention from the mid-1950s through the ITV series Sunday Night at the London Palladium. Since then he has hosted several game shows, including The Generation Game, Play Your Cards Right, The Price Is Right and You Bet!. He co-presented Strictly Come Dancing from 2004 to 2013. Forsyth is known for his catchphrase, "Nice to see you, to see you nice". 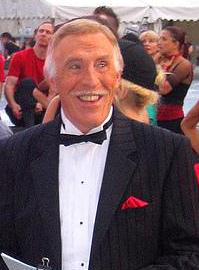 image credit
Bruce Forsyth by SqueakBox, is licensed under cc-by-sa-3.0, resized from the original.