Brittany Anne Murphy-Monjack (born Brittany Anne Bertolotti; November 10, 1977 – December 20, 2009), known professionally as Brittany Murphy, was an American film and stage actress, singer, and voice artist. Murphy, a native of Atlanta, moved to Los Angeles, California as a teenager, and pursued a career in acting. Her breakthrough role was in Amy Heckerling's Clueless (1995), followed by supporting roles in independent films such as Freeway (1996) and Bongwater (1998). release in April 2014. 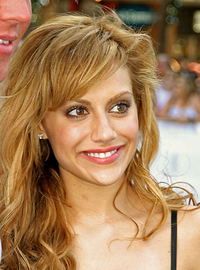 image credit
Brittany Murphy by Rob & Jules, is licensed under cc-by-sa-2.0, resized from the original.