Britney Jean Spears (born December 2, 1981) is an American recording artist and entertainer. Born in McComb, Mississippi, and raised in Kentwood, Louisiana, she performed acting roles in stage productions and television shows as a child before signing with Jive Records in 1997. Spears's first and second studio albums, . Forbes reported that Spears was the highest paid female musician of 2012, with earnings of $58 million, having last topped the list in 2002. 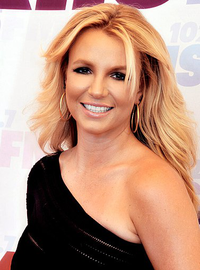 image credit
Britney Spears by Glenn Francis, is licensed under cc-by-sa-4.0, resized from the original.