Brad Pickett (born September 24, 1978) is an English mixed martial artist and the former Cage Rage British Featherweight Champion. He last competed as a bantamweight in the Ultimate Fighting Championship, and is preparing for a flyweight run. As of March 10, 2014, he is #11 in official UFC flyweight rankings and #13 in bantamweight, and ranked the #6 bantamweight in the world by Sherdog. Dana White has stated that Pickett is one of his favorite fighters to watch. He has also competed for the WEC and BodogFIGHT, and at the Dynamite!! USA event. 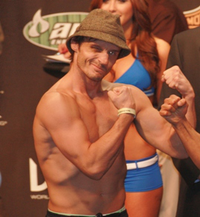 image credit
Brad Pickett by Marianamizzle, is licensed under cc-by-sa-3.0, resized from the original.