Norman Julius "Boomer" Esiason (/əˈsaɪ.əsən/; born April 17, 1961) is a retired American football quarterback and current network color commentator. During a 14-year career in the National Football League (NFL), Esiason played for the Cincinnati Bengals, New York Jets, and Arizona Cardinals. Since retiring, he has worked as a football analyst, first for ABC and HBO, and currently for CBS Sports on The NFL Today, Westwood One for Monday Night Football and the Super Bowl, and Showtime's Inside the NFL. Esiason is also co-host of the morning sports radio program Boomer and Carton on WFAN in New York. 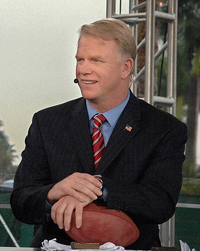