Bonnie Lynne Hunt (born September 22, 1961) is an American actress, comedian, writer, director, television producer, and daytime television host. She has appeared in the films Rain Man, Beethoven, Beethoven's 2nd, Jumanji, Jerry Maguire, The Green Mile, Cheaper by the Dozen, and Cheaper by the Dozen 2. She has done voice work in the Pixar films A Bug's Life, Monsters, Inc., Monsters University, Toy Story 3, Cars, and Cars 2. Hunt has starred in the television series Grand and Davis Rules as well as creating, producing, writing, and starring in The Building, Bonnie, and Life with Bonnie. From 2008 to 2010, she hosted the day time talk show The Bonnie Hunt Show. 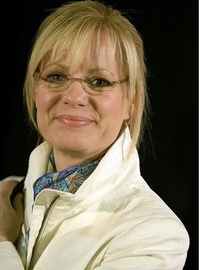 image credit
Bonnie Hunt by https://www.flickr.com/photos/garvinj/, is licensed under cc-by-2.0, resized from the original.