Robert Allen "Bob" Iger (born February 10, 1951) is an American businessman and the current chairman and chief executive officer of The Walt Disney Company. He was named president of Disney in 2000, and later succeeded Michael Eisner as chief executive in 2005, after a successful effort by Roy E. Disney to shake-up the management of the company. Iger oversaw the acquisition of Pixar Animation Studios in 2006, following a period of strained relations with the animation studio. He also led the company to acquire Marvel Entertainment in 2009 and Lucasfilm in 2012, further broadening Disney's intellectual property franchises. 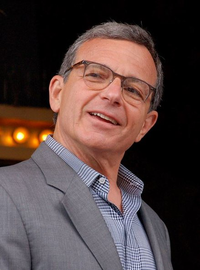 image credit
Bob Iger by Angela George, is licensed under cc-by-sa-3.0, resized from the original.