Billy Eichner (born September 18, 1978) is an American comedian, actor, writer, and television personality. He is the star, executive producer and creator of Funny Or Die's Billy on the Street, a comedy game show that airs on truTV. Eichner was nominated for a Daytime Emmy Award for "Outstanding Game Show Host" in 2013. He is also known for playing Craig Middlebrooks on the sitcom Parks and Recreation. Eichner currently stars in the Hulu original series Difficult People alongside Julie Klausner. 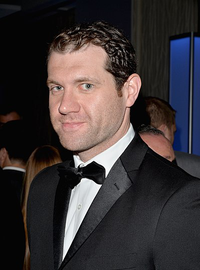 image credit
Billy Eichner by Yahoo, is licensed under cc-by-2.0, resized from the original.