Billie Paul Piper (born Leian Paul Piper; 22 September 1982), is a British singer and actress. Born and raised in Swindon, Wiltshire, she made her entertainment debut in Scratchy & Co. (1998), and at the age of fifteen signed a recording contract and released her debut single "Because We Want To", which debuted at number one in the UK, making Piper the youngest artist ever to debut at number one. From 2007 until 2011, she starred as the high-flying escort Belle de Jour in the TV series Secret Diary of a Call Girl. 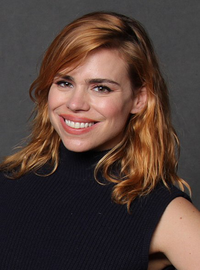 image credit
Billie Piper by Florida Supercon, is licensed under cc-by-2.0, resized from the original.