William "Bill" Hader (born June 7, 1978) is an American actor, voice actor, comedian, producer and writer. He is known for his work as a cast member on Saturday Night Live, his lead voice role in Cloudy with a Chance of Meatballs, and his supporting roles in comedy films such as Superbad, Pineapple Express, Tropic Thunder, Adventureland, Men in Black 3, Paul, Forgetting Sarah Marshall, and Night at the Museum: Battle of the Smithsonian. 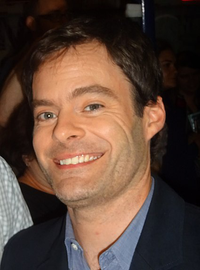 image credit
Bill Hader by Greg2600, is licensed under cc-by-sa-2.0, resized from the original.