Beverly Eaves "Bev" Perdue (born Beverly Marlene Moore; January 14, 1947) is an American politician and member of the Democratic Party who served as the 73rd Governor of the U.S. state of North Carolina from 2009 to 2013. She was the first female governor of North Carolina. Perdue started her political career in the 1980s, serving in the North Carolina House of Representatives. She then served five terms in the North Carolina Senate before she was elected as the 32nd Lieutenant Governor of North Carolina. Perdue was elected to the office of Governor of North Carolina in 2008 against Charlotte Mayor Pat McCrory by a 50-46 margin. Her 2008 gubernatorial campaign was under both state and federal investigation, and was fined $30,000 in 2010. When Hillary Clinton dropped out of the 2008 presidential race, The New York Times mentioned Perdue as a potential future presidential candidate. On January 26, 2012, facing sinking approval ratings, Perdue announced that she would not seek reelection in the 2012 gubernatorial election. She left office in January 2013. 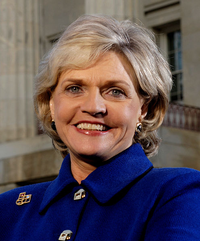