Bethany Joy Lenz (formerly Galeotti; born April 2, 1981), also credited as Joie Lenz, is an American actress, director, producer, and musician, best known for her portrayal of Haley James on the CW television drama One Tree Hill. She has also starred as Michelle Bauer Santos on the CBS Daytime soap opera Guiding Light and is recognized for her music as a solo artist and as a member of the band Everly. 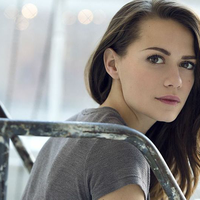