Bernard "Bernie" Sanders (born September 8, 1941) is an American politician and the junior United States Senator from Vermont. Before serving in the Senate, he represented Vermont's at-large district in the United States House of Representatives and served as mayor of Burlington, the largest city in Vermont.Sanders is a self-described democratic socialist, and has praised Scandinavian-style social democracy.

Birth time credit: From a user who worked for Bernie Sanders in early races in Burlington, Vermont. / Accuracy: unknown 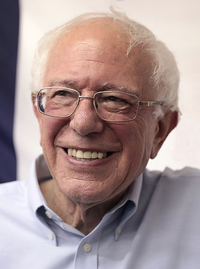 image credit
Bernie Sanders by Wugapodes, is licensed under cc-by-sa-2.0, resized from the original.