Bernard Jeffrey "Bernie" McCullough (October 5, 1957 – August 9, 2008), better known by his stage name Bernie Mac, was an African American stand-up comedian, actor, voice artist, and comedian at the All Jokes Aside comedy club in Chicago. Born and raised on the South Side of Chicago, Mac gained popularity as a stand-up comedian. He joined comedians Steve Harvey, Cedric the Entertainer, and D. His death on August 9, 2008 was caused by complications from pneumonia. 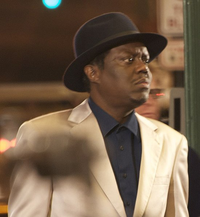 image credit
Bernie Mac by http://coreygriffin.smugmug.com/, is licensed under cc-by-sa-3.0, resized from the original.