Bradley Darryl "BD" Wong (born October 24, 1960) is an American actor, best known for his roles as Dr. George Huang on Law & Order: Special Victims Unit, as Father Ray Mukada on Oz, as Dr. John Lee on Awake, Henry Wu in the first Jurassic Park film and the upcoming fourth entry, Jurassic World, his portrayal of Ngawang Jigme in the movie Seven Years in Tibet, as well as voice-over and stage acting.Other notable films he starred in are Father of the Bride and And the Band Played On. 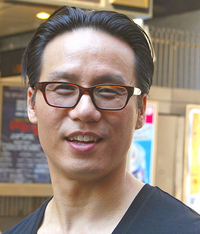 image credit
BD Wong by https://www.flickr.com/photos/thecanonrattman/, is licensed under cc-by-sa-3.0, resized from the original.