Barry White, born Barry Eugene Carter ((1944-09-12)September 12, 1944 – July 4, 2003(2003-07-04)), was an American composer and singer-songwriter.A two-time Grammy Award-winner known for his distinctive bass voice and romantic image, White's greatest success came in the 1970s as a solo singer and with the Love Unlimited Orchestra, crafting many enduring soul, funk, and disco songs such as his two biggest hits, "You're the First, the Last, My Everything" and "Can't Get Enough of Your Love, Babe." Along with Isaac Hayes, White is considered by Allmusic. 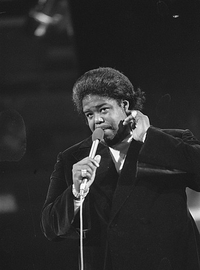