Azealia Banks (born May 31, 1991) is an American rapper, singer, and songwriter. Raised in Harlem, New York, Banks pursued an interest in musical theatre at a young age, studying at the LaGuardia High School of Performing Arts before dropping out to focus on her musical career. In late 2008, she adopted the pseudonym "Miss Bank$", and began releasing music through MySpace, eventually being signed to XL Recordings at age 17. 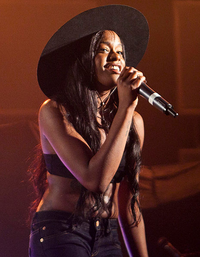 image credit
Azealia Banks by Tim Boddy, is licensed under cc-by-2.0, resized from the original.