Avneet Kaur is an Indian actress and dancer. Kaur was born on 13 October 2001. in Jalandhar, Punjab, India. She completed her sixth class studies in 2013 at D.A.V. Public School,Jalandhar. Kaur started her career with Dance India Dance Li'l Masters as Contestant. She also participated in another DID series titled, Dance Ke Superstars. Kaur made her acting debut with the soap opera Meri Maa as Jhilmil. Later, she played in comedy series Tedhe Hain Par Tere Mere Hain. In June 2012, She participated in the fifth season of dance reality show Jhalak Dikhhla Jaa. Thereafter she portrayed the leads in the 2012 Savitri as young Rajkumari Damyanti, and the 2013 Ek Mutthi Aasmaan as young Pooki Kapoor. Kaur started her filming career with the 2014 Hindi film Mardaani as Meera. Kaur was last appeared in the 2014 TV series Hamari Sister Didi as Khushi. Kaur also worked in various television advertisements. 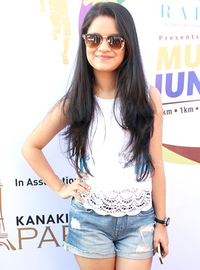 image credit
Avneet Kaur by http://www.bollywoodhungama.com, is licensed under cc-by-3.0, resized from the original.