Albertín Aroldis Chapman de la Cruz ([aˈɾoldis ˈtʃapman]; born February 28, 1988) is a Cuban professional baseball pitcher for the New York Yankees of Major League Baseball (MLB). He previously played for the Cincinnati Reds of MLB and Holguín in the Cuban National Series. Chapman bats and throws left-handed, and is nicknamed the Cuban Missile or the Cuban Flame Thrower. Chapman pitched for Holguín domestically and internationally for the Cuban national baseball team. He defected from Cuba in 2009 and signed a contract with the Reds in 2010. Chapman made his MLB debut that season. He won the MLB Delivery Man of the Month Award as the best relief pitcher for July 2012, and has been named to four straight National League All-Star teams from 2012 to 2015. He holds the record for the fastest recorded pitch speed in MLB history at 105 mph (169 km/h), and also reached 106 mph (170.6 km/h) in another game, although this speed is disputed. On July 11, 2014 he broke the record, previously held by Bruce Sutter, for the most consecutive relief appearances with a strikeout, having struck out at least one batter in 40 consecutive appearances. Chapman's streak began on August 21, 2013, and lasted 49 consecutive games over two seasons, with the 49th and final game being on August 13, 2014. On July 19, 2015 he became the fastest pitcher in MLB history to reach 500 strikeouts. 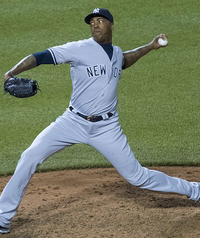 image credit
Aroldis Chapman by Keith Allison, is licensed under cc-by-sa-2.0, resized from the original.