Arijit Singh (born 25 April 1987) is an Indian playback singer and a music programmer. Born in Jiaganj, Murshidabad, West Bengal, his career began upon participating in the reality show Fame Gurukul (2005), in which he lost at the finals. After winning another reality show called 10 Ke 10 Le Gaye Dil, Singh built a recording setup of his own, beginning his journey with music programming. Subsequently, he went to become assistant music programmer to Pritam Chakraborty, Shankar-Ehsaan-Loy, Vishal-Shekhar and Mithoon. Singh became more well-known with the release of "Tum Hi Ho" from Aashiqui 2 (2013). He was given the Best Male Playback Singer award for the song, in 59th Filmfare Awards. In 2014, he collaborated with Jeet Gannguli—for whom he performed the rest of his tracks in Aashiqui 2 —for CityLights, where he rendered the romantic version of the song "Muskurane", which fetched him most nominations in the year. Gannguli composed "Suno Na Sangemarmar" and Shankar–Ehsaan–Loy's Sufi song, "Mast Magan" garnered him another two nominations in 60th Filmfare Awards. 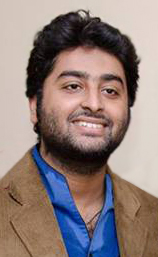 image credit
Arijit Singh by Debjitp, is licensed under cc-by-3.0, resized from the original.