Ariana DeBose (born January 25, 1991) is an American actress, singer, and dancer, known for her work in musical theatre, film and television. DeBose made her television debut competing on So You Think You Can Dance. She then made her Broadway debut in the musical Bring It On: The Musical in 2011 and appear in further Broadway roles in Motown: The Musical in 2013 and Pippin in 2014. She also appeared in the original cast of Hamilton as The Bullet in 2015 to 2016 and as Jane in A Bronx Tale in 2016 to 2017. In 2018 she was nominated for the Tony Award for Best Featured Actress in a Musical for her role as Donna Summer in Summer: The Donna Summer Musical. She also appeared in the taped version of Hamilton which was released in 2020 on Disney+, and played Alyssa Greene in Netflix's The Prom (2020) and Emma in the Apple TV+ musical comedy series Schmigadoon! (2021). She is set to play Anita in Steven Spielberg's upcoming film adaptation of West Side Story. 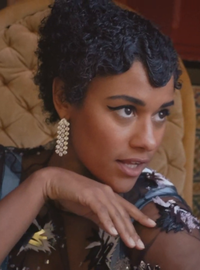 image credit
Ariana DeBose by Bibhu Mohapatra, is licensed under cc-by-3.0, resized from the original.