Alejandra Ghersi (born 14 October 1989), known professionally as Arca, is a Venezuelan musician, singer, composer, record producer, and DJ based in Barcelona. She has released four studio albums — Xen (2014), Mutant (2015), Arca (2017) and Kick I (2020) — and has contributed production work to artists such as Björk, Kanye West, FKA twigs, Kelela, and Frank Ocean. 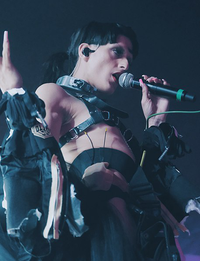 image credit
Arca (musician) by Verónica Estrada, is licensed under cc-by-sa-3.0, resized from the original.