Antoine Griezmann (French pronunciation: ​[ɑ̃.twan ɡʁizmɑn]; born 21 March 1991) is a French footballer who currently plays for Spanish club Real Sociedad in La Liga. He plays mainly as a left winger. Griezmann is known for his ball control, quick acceleration, and dribbling and is a French youth international, having represented his country at under-19, under-20, and under-21 level. In 2010, he was part of the team that won the 2010 UEFA European Under-19 Football Championship on home soil. 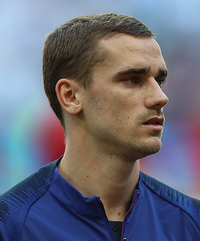 image credit
Antoine Griezmann by , is licensed under cc-by-sa-3.0, resized from the original.