Michael Anthony Hall (born April 14, 1968), known professionally as Anthony Michael Hall, is an American actor, film producer, and director who starred in several teen-oriented films of the 1980s. Hall began his career in commercials and on stage as a child, and made his screen debut in 1980. His films with director-screenwriter John Hughes, beginning with the popular 1983 comedy National Lampoon's Vacation and the coming-of-age comedy Sixteen Candles, shaped his early career. During its run, the show was one of the highest-rated cable television series. 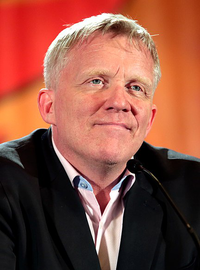 image credit
Anthony Michael Hall by Gage Skidmore, is licensed under cc-by-sa-3.0, resized from the original.