Anthony David "Ant" McPartlin, OBE (born 18 November 1975) also known as P.J. is an English television presenter and actor, best known as one half of the English comedy and television presenting duo Ant & Dec, with the other being Declan Donnelly. He initially came to prominence in the early-to-mid-1990s in the children's drama series Byker Grove and as one half of the pop music duo PJ & Duncan. Since the late 1990s, Ant & Dec have had a very successful career as TV presenters, fronting programmes such as SMTV Live, Friends Like These, Pop Idol, I'm a Celebrity...Get Me Out of Here!, Ant & Dec's Saturday Night Takeaway, Britain's Got Talent, PokerFace, Push the Button, Red or Black? and Text Santa. They have also returned to acting, starring in a 2002 Tribute to The Likely Lads and the 2006 film Alien Autopsy. 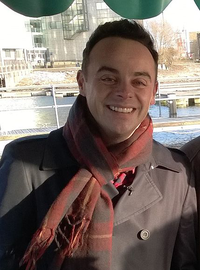 image credit
Anthony McPartlin by Ben Salter, is licensed under cc-by-2.0, resized from the original.