Anthony Franciosa (October 25, 1928 – January 19, 2006), usually billed as Tony Franciosa during the height of his career, was an American film, TV and stage actor. He made several feature films, including A Face in the Crowd (1957) and Career (1959) for which he won the Golden Globe for Best Actor/Drama. In television, along with many minor parts, he played lead roles in five television series: the sitcom Valentine's Day (1964–65), drama The Name of the Game (1968–71), Search (1972–73), Matt Helm (1975) and Finder of Lost Loves (1984). However, he began as a successful stage actor, gaining a Tony Award nomination for the drug-addiction play A Hatful of Rain. 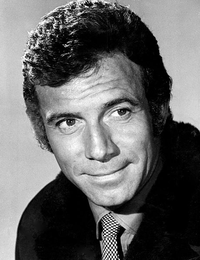