Annett Louisan (born Annett Päge on 2 April 1977, in Havelberg, Saxony-Anhalt Germany) is a German singer. She lives in Hamburg, Germany. Louisan is her stage name, derived from the name of her grandmother, Louise. Concerning her birth year, there is conflicting testimony, with the official date being given as 1979. Her first album, Bohème, was listed on German charts for almost a year, with a peak ranking of third place. She appeared on the AVO Session program at Basle on 7 November 2006. In 2004, Louisan married Gazi Işıkatlı, a Turkish business student, but they divorced in 2008. In June 2014, Louisan married songwriter and Hamburg native Marcus Brosch. 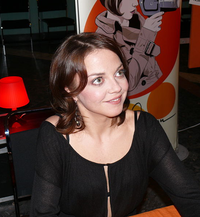 image credit
Annett Louisan by Nucomu, is licensed under cc-by-sa-3.0, resized from the original.