Annelies "Anne" Marie Frank (Dutch pronunciation: [ɑnəˈlis ˈɑnə maˈri frɑŋk], German pronunciation: [anəliːs ˈanə maˈʁiː fʁaŋk], About this sound pronunciation ; 12 June 1929 – early March 1945) is one of the most discussed Jewish victims of the Holocaust. Her wartime diary The Diary of a Young Girl has been the basis for several plays and films. Born in the city of Frankfurt in Weimar Germany, she lived most of her life in or near Amsterdam, in the Netherlands. The blank diary, which was given to Anne on her thirteenth birthday, chronicles her life from 12 June 1942 until 1 August 1944. 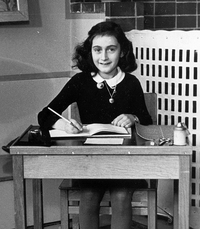