Anna Helene Paquin (/ˈpækwɪn/; born 24 July 1982) is a Canadian-born New Zealand actress. Her first film was The Piano, for which she won the Academy Award for Best Supporting Actress in March 1994 at the age of 11, making her the second youngest winner in Oscar history. She later appeared in a number of successful films, including Fly Away Home, She's All That, Almost Famous, and the X-Men franchise as Rogue from Marvel Comics. Paquin is also known for her role as Sookie Stackhouse in the HBO series True Blood, for which she won a Golden Globe Award for Best Performance by an Actress in a Television Series – Drama in 2009. 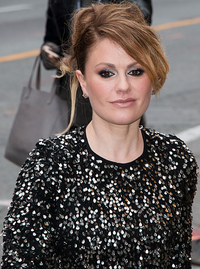 image credit
Anna Paquin by Somewhere In Toronto, is licensed under cc-by-sa-2.0, resized from the original.