Anna May Wong (Chinese: 黃柳霜; pinyin: Huáng Liǔshuāng) (January 3, 1905 – February 3, 1961) was the first Chinese American movie star, and the first Asian American actress to gain international recognition. Her long and varied career spanned both silent and sound film, television, stage, and radio.Born near the Chinatown neighborhood of Los Angeles to second-generation Chinese-American parents, Wong became infatuated with the movies and began acting in films at an early age. Interest in her life story continues and another biography, Shining Star: The Anna May Wong Story, was published in 2009. 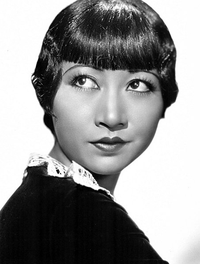