Ann Elizabeth Dunwoody (born January 14, 1953) is a retired general of the United States Army. She was the first woman in U.S. military and uniformed service history to achieve a four-star officer rank, receiving her fourth star on November 14, 2008. In 2005 Dunwoody became the Army's top-ranking female when she received the promotion to lieutenant general (three stars) and became the Army's Deputy Chief of Staff, G-4 (logistics). She was nominated as Commanding General, U.S. Army Materiel Command, by President George W. Bush on June 23, 2008, and confirmed by the Senate one month later. She served in that capacity until August 7, 2012, and retired from the Army on August 15, 2012. 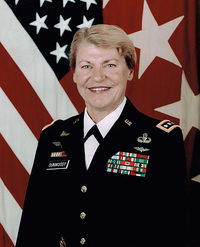