Ane Brun (Norwegian pronunciation: [ɑnə brʉn]) (born Ane Brunvoll on 10 March 1976 in Molde, Norway) is a Norwegian international songwriter, guitarist, and vocalist. Since 2003 she has recorded eight albums, six of which are studio albums (including a collection of duets) and one live DVD. She has lived in Stockholm, Sweden, since 2001, where she writes, records, and runs her own label (Balloon Ranger Recordings) when not on tour. 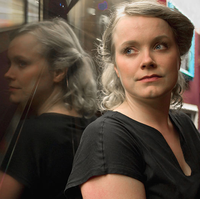 image credit
Ane Brun by Benot Derrier, is licensed under cc-by-sa-3.0, resized from the original.