Andrew Michael Sullivan (born 10 August 1963) is a British author, editor and blogger, resident in the United States. A former editor of The New Republic and the author or editor of six books, Sullivan is an influential blogger and commentator. He was a pioneer of the political blog, starting his in 2000. He eventually moved the blog to various publishing platforms, including Time Magazine, The Atlantic, and The Daily Beast. In 2013, he switched to an independent, subscription based format.Sullivan's Burkean conservativism is rooted in his British Catholic background and in the political philosophy of his mentor, Michael Oakeshott.Born and raised in England, he has lived in the United States since 1984 and currently resides in New York and Provincetown, Massachusetts. He is openly gay and a practicing Roman Catholic. 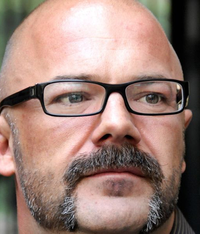 image credit
Andrew Sullivan by http://www.stuckincustoms.com, is licensed under cc-by-2.0, resized from the original.