Andrew Johnson (December 29, 1808 – July 31, 1875) was the 17th President of the United States, serving from 1865 to 1869. Johnson became president as Abraham Lincoln's vice president at the time of Lincoln's assassination. A Democrat who ran with Lincoln on the National Union ticket, Johnson came to office as the Civil War concluded. Although Johnson's ranking has fluctuated over time, he is generally considered among the worst American presidents for his opposition to federally guaranteed rights for African Americans. 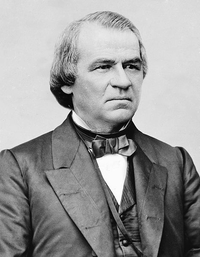