Amy Beth Schumer (born June 1, 1981) is an American stand-up comedian, actress, and writer. She placed fourth on the fifth season of NBC's Last Comic Standing, and she placed second on Comedy Central's Reality Bites Back. In 2012, she held a recurring role on the Adult Swim series Delocated. She is the star of the comedy series Inside Amy Schumer, which premiered on Comedy Central on April 30, 2013. 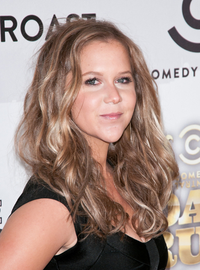 image credit
Amy Schumer by Mario Santor, is licensed under cc-by-sa-3.0, resized from the original.