Amy Jo Johnson is an American actress, singer, songwriter, scriptwriter, producer, director, musician and gymnast, first starring as the Pink Ranger Kimberly Ann Hart in Mighty Morphin Power Rangers. Aside from Power Rangers, she is also known for her roles in Felicity, The Division, Wildfire, and Flashpoint. She also starred in television films and movies including Susie Q, Killing Mr. Griffin, Perfect Body, Sweetwater, and Magma: Volcanic Disaster. Johnson is one of very few Power Rangers alumni to continue her career as an actress.Johnson released her first song, "Puddle of Grace", when she was on Felicity. Since then, she has released a few solo albums. As a volunteer, she has participated as a tutor for refugee children through the International Rescue Committee's summer program in the Bronx and made trips to Bosnia as a volunteer with the Global Children's Organization. 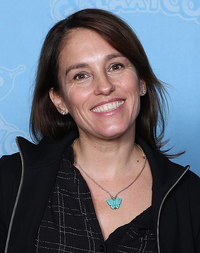 image credit
Amy Jo Johnson by Super Festivals, is licensed under cc-by-2.0, resized from the original.