Ami Suzuki (鈴木 亜美 Suzuki Ami, born 9 February 1982) is a Japanese recording artist, actress, and DJ from Zama, Kanagawa, Japan. Having been discovered at the talent TV show Asayan, she was one of the most popular female teen idol in the late 1990s. However, in 2000 Suzuki faced legal problems with her management company resulting in a controversial blacklisting from the entertainment industry. Suzuki attempted to resurrect her career under her own steam with two indie singles before signing to Avex Trax in 2005. She released "Delightful", a dance song that reached No. 3 on the Japanese Oricon charts with a style similar to electronic club music, significantly different from her pop idol days. Since her appearance in the 2006 film Rainbow Song, Suzuki has gradually made a name for herself in the acting field, starring in various movies, television series and musicals. 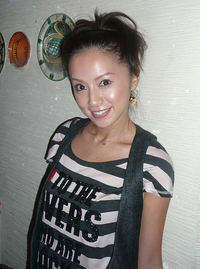 image credit
Ami Suzuki by Readyforlara, is licensed under cc-by-sa-3.0, resized from the original.