Amber Mildred Ruffin (born January 9, 1979) is an American comedian, television host, writer, actress, author and playwright. She hosts her own late-night talk show titled The Amber Ruffin Show on NBC and Peacock. She has been a writer for Late Night with Seth Meyers since 2014. When she joined the show, she became the first Black woman to write for a late-night network talk show in the United States. In January 2021, she co-authored a book with her sister, titled You'll Never Believe What Happened to Lacey: Crazy Stories about Racism, which was placed on the New York Times Best Seller list. 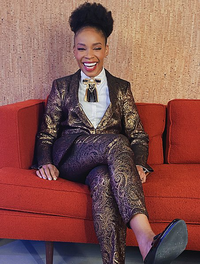