Ama Serwah Genfi (born July 4, 1994), known professionally as Amaarae, is a Ghanaian-American singer, songwriter, producer, and engineer known for her work around representation of gender and race in music. After collaborating with artists like AYLØ, Kay-Ara, Yaw P and putting out a few non-album singles, she released her debut 6 track EP, Passionfruit Summers in 2017. The album features the standout song, "Fluid", which was complemented by a critically acclaimed music video. Amaarae has since added Stonebwoy, Kojey Radical, M3NSA, Santi, Blaqbonez, Buju, Odunsi, B4bonah and very recently, in 2019, the Nigerian Singer-songwriter Wande Coal to the list of artists she has worked with. 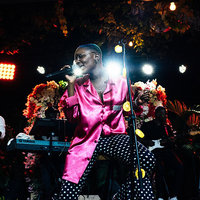 image credit
Amaarae by Iamshiba, is licensed under cc-by-sa-4.0, resized from the original.